Stock Market: “Relevant Waves Vs. Irrelevant News”
Let’s (again) delve into the connection between the stock market and news

The stock market is a fractal — i.e., a self-repeating form at all degrees of trend. Meaning, without the time or price labels, you can’t tell if you’re looking at a 2-minute chart or at a monthly one.

Yes, there may be very brief reactions to news, but then the main trend continues. That’s because the larger stock market trends aren’t driven by the news, they are driven by market participants’ bias, bullish or bearish. What we call, market psychology.

That’s why you often see headlines with the word “despite” in them — like, “Stocks rally despite U.S. unemployment at the highest level since the Great Depression,” or “Stocks fall despite stronger-than-expected consumer confidence report.” That word, “despite,” tells you everything you need to know.

Review Part I and Figures 1 through 5 in Chapter 12 of Robert Prechter’s 2017 book, The Socionomic Theory of Finance, and you’ll see evidence that the market is not priced according to external conditions.

And, here’s what the book says about those brief reactions:

Evidence for even temporary emotional reactions in markets is surprisingly suspect. All market observers have seen futures prices gyrate more intensely for a few seconds or minutes before and/or after an announcement perceived as major news. However, ensuing market movement may be totally opposite to the tenor of such news, even when it is a total surprise.

This quote came to mind when, on June 29, this sobering news appeared on a major financial website (CNBC):

Nearly half the U.S. population is without a job, showing how far the labor recovery has to go

The employment-population ratio — the number of employed people as a percentage of the U.S. adult population — plunged to 52.8% in May, meaning 47.2% of Americans are jobless.

Interestingly, on that very day, the DJIA closed up 580 points.

Plus, as you know, the stock market has bounced back substantially since the March lows, despite a historic slew of negative news.

Indeed, the June Elliott Wave Theorist, a monthly publication which has offered subscribers analysis of financial markets and cultural trends since 1979, showed this chart and said: 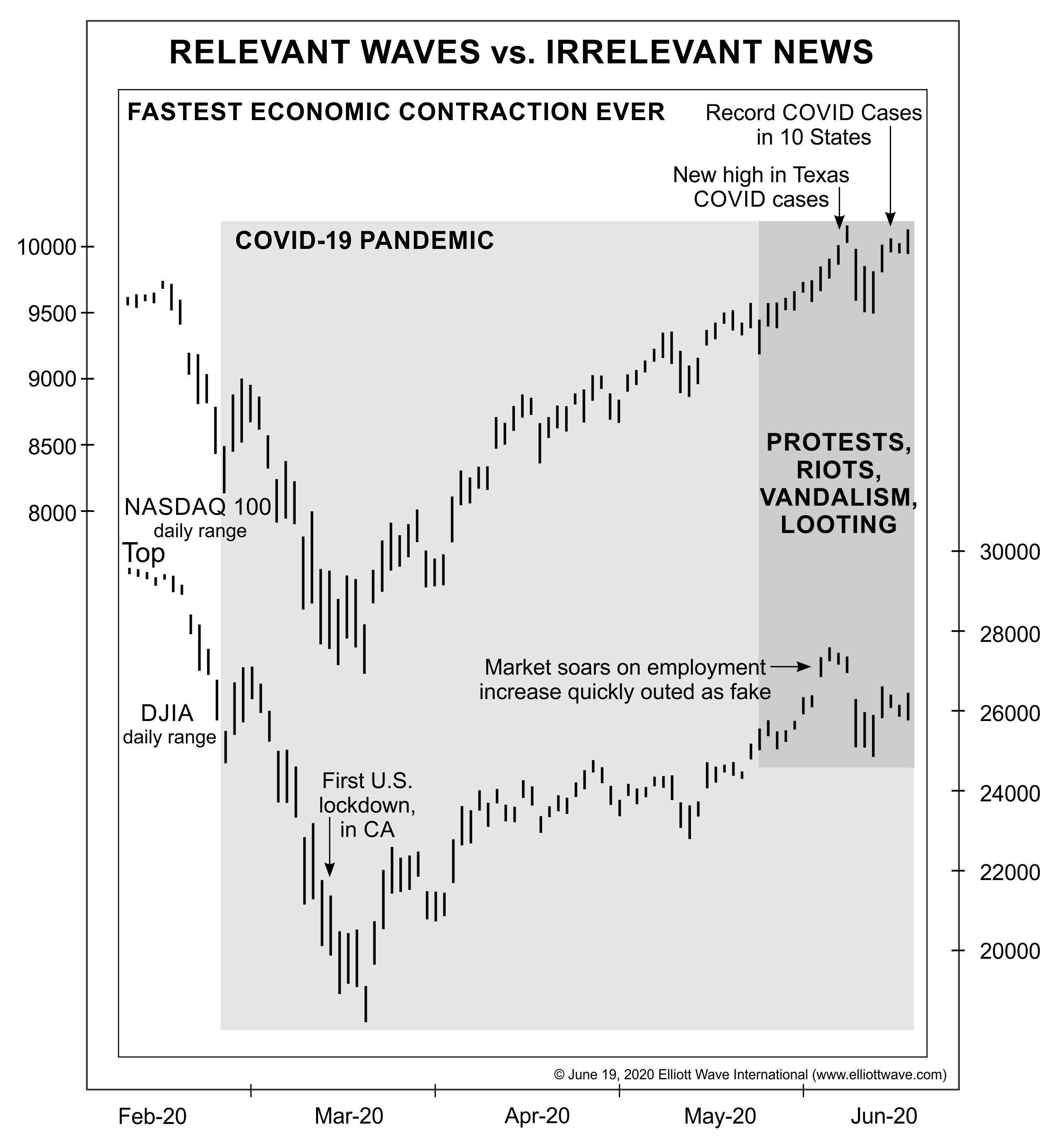 The first reports of economic contraction came out in March and continued through May. … Stock prices not only rose for seven weeks but also jumped higher on nearly every report of a rise in unemployment claims. A particularly big up day occurred when statistics suggested an increase in employment, but analysts quickly recognized that the numbers were untrustworthy due to restrictions in data collection deriving from the pandemic. No matter; stocks went up the next day, too.

In fact, you can also see that the stock market rose more than it fell when Covid-19 dominated the headlines! It also rose on the day of the first protests — and continued to climb for two weeks, despite the vandalism, looting and clashes between protestors and police not seen in decades.

The real driver of the stock market’s trend is investor psychology, which Elliott waves reflect.

The Wave Principle is governed by man’s social nature, and since he has such a nature, its expression generates forms. As the forms are repetitive, they have predictive value.

Sometimes the market appears to reflect outside conditions and events, but at other times it is entirely detached from what most people assume are causal conditions. The reason is that the market has a law of its own.

Learn about this “law” of the market.

You can do so by reading the online version of Elliott Wave Principle: Key to Market Behavior, which is available to you free when you join Club EWI. Membership is also free.

Club EWI is the world’s largest Elliott wave educational community and members get free access to a wealth of resources on investing and trading.

Click on this link to get started: Elliott Wave Principle: Key to Market Behavior — read it for free.

This is a re-post of an original EWI article, which can be found here.  Interested in one of the best books on Elliott Wave: Elliott Wave Principle, Key to Market Behavior, by Frost & Prechter.  Gain online access to it free by clicking here.
Stock Market: “Relevant Waves Vs. Irrelevant News”2020-07-122020-07-21https://elliottwaveplus.com/wp-content/uploads/2016/07/EWP_fullcolor_logo.pngElliottwaveplus.comhttps://elliottwaveplus.com/wp-content/uploads/2019/01/dollar-exchange-rate-544949_1920.jpg200px200px
About
Sid Norris
My name is Sid Norris and welcome to Elliott Wave Plus! I’ve been an active investor, trader, and student of the markets for over 30 years. Elliott Wave Plus is the culmination of everything I've learned about technical analysis of the financial markets.

How To Use Bar Patterns To Spot Trade SetupsGuides

How the Wave Principle Can Improve Your TradingGuides