You Can Forecast Markets Just by Looking at Chart Patterns | Fractals

Nature is full of fractals.

Fractals are self-similar forms that show up repeatedly. Consider branching fractals such as blood vessels or trees: a small tree branch looks like an approximate replica of a big branch, and the big branch looks similar in form to the entire tree.

Fractals also form in the price charts of financial markets, at all degrees of trend, in both up- and downtrends. In fact, without knowing the time or price labels, you can’t tell if you’re looking at a 2-minute chart, a daily chart — or a yearly one.

Fans of Elliott wave analysis have been using this information to their advantage for decades. Our March 2020 Elliott Wave Theorist gave subscribers two important real-time examples of fractals at work. Here’s the first one along with the commentary: 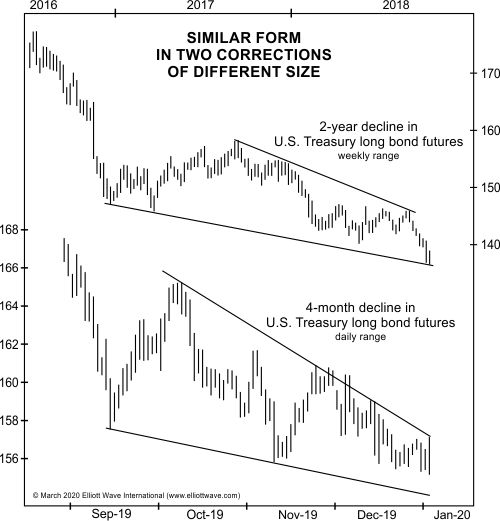 This figure offers a good illustration of the fractal nature of markets. It shows the correction in T-bond futures of 2016-2018 on a weekly chart against the correction in the last four months of 2019 on a daily chart. They look quite similar, and each one led to a run to new highs.

And here’s the next example, along with commentary from the March Theorist: 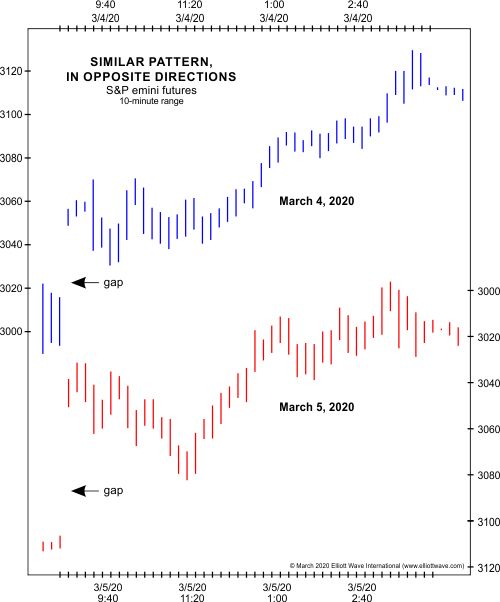 This figure shows another example of the market’s adherence to forms. The top graph shows the 10-minute range for the S&P futures contract on March 4, and the bottom graph shows the same for March 5. Don’t they look similar?

In fact, however, the trend of the market in the top graph was up, and the trend shown beneath it was down. We simply inverted the bottom graph for our illustration. Prices rose on March 4, and they fell on March 5, in the same pattern.

Here’s what this means for investors and traders: The fact that price charts unfold in repetitive and recognizable patterns makes financial markets predictable.

Scientific discoveries have established that self-similar pattern formation is a fundamental characteristic of complex systems, which include financial markets. Some such systems undergo “punctuated growth,” that is, periods of growth alternating with phases of non-growth or decline, building into similar patterns of increasing size.

Learn more about these self-similar pattern formations and how they can help you to anticipate turns in widely traded financial markets, including the stock market.

You can do so by reading the online version of Elliott Wave Principle: Key to Market Behavior, 100% free.

This article was syndicated by Elliott Wave International and was originally published under the headline Here’s Why You Can Forecast Markets Just by Looking at Chart Patterns. EWI is the world’s largest market forecasting firm. Its staff of full-time analysts led by Chartered Market Technician Robert Prechter provides 24-hour-a-day market analysis to institutional and private investors around the world.